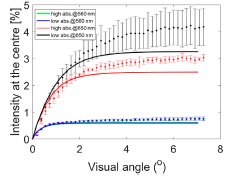 Scattering in the eye occurs mainly at two sites: the eye’s optical media and the deeper retinal layers. Although the two phenomena are often treated collectively, their spatial domain of contribution to the double-pass Point Spread Function (PSF) is different: the fundus effect is limited to the narrow and middle part of the PSF whereas scattering in the eye’s optics extends also to wide angles. The objective of this work was to determine the domain of contribution at the double-pass PSF of light scattered in the ocular media and the ocular fundus, using simulated and experimental data for two different wavelengths and for two different pigmentations.

Diffuse reflection was simulated using Monte Carlo simulations for a four-layer retinal fundus model. Four situations were simulated in total for two different choroidal absorptions at two different wavelengths. Light diffusion in the fundus was the only phenomenon considered in the model. The simulations were compared against experimental fundus reflection data obtained in a previous study.

The simulations showed that at 560 nm, diffusion in the fundus causes light to extend to a radius of 2°, independently of the choroidal pigmentation, whereas at 650 nm it extends to radii of 4.5° and 4° for low and high choroidal pigmentation respectively. Experimental data showed a similar behaviour at low angles where light diffusion in the fundus is dominant, but different at higher angles due to scattering in the ocular media.

© 2017 The Authors Ophthalmic & Physiological Optics © 2017 The College of Optometrists

About the Author: admin